If you learned English as a second language and you regularly speak a language other than English, this appendix is for you. It also provides a refresher course on many of the elements in the rest of this handbook.

The simplest level of English word order within a sentence is that subjects come first followed by verbs and then direct objects.

When you have more complicated sentences, use the following general order.

Some languages, such as Spanish, insert “no” before a verb to create a negative sentence. In English, the negative is often indicated by placing “not” after the verb or in a contraction with the verb.

Examples of Nouns That Can Be Either Count or Noncount Nouns

In English, nouns are identified or quantified by determiners. Articles, such as a, an, and the, are one type of determiner. Use the following guidelines to alleviate confusion regarding whether to use an article or which article to use.

I have a dog at home, also. (The word “dog” is a nonspecific noun since it doesn’t refer to any certain dog.)

(before a vowel): Carrie gave everyone an apple at lunch.

(before a consonant; with proper noun): He was wearing a Texas shirt.

I heard every noise all night long.

I tried each Jell-O flavor and liked them all.

(with count noun): I am going to eat that apple.

(with noncount noun): I am not too excited about this weather.

I didn’t have any donuts at the meeting because he ate them all.

Do you have enough donuts for everyone?

He ate some donuts at the meeting.

There’s not much spaghetti left.

(with noncount noun): The weather is beautiful today.

(with singular count noun): Who opened the door?

(with plural count noun): All the houses had brick fronts.

Daryl and Louise have been traveling for several days.

Are those shoes yours?

English count nouns have singular and plural forms. Typically, these nouns are formed by adding –s or –es. Words that end in –ch, –sh, or –s usually require the addition of –es to form the plural. Atypical plurals are formed in various ways, such as those shown in the following table.

Noncount nouns typically have only one form that is basically a singular form. To quantify them, you can add a preceding phrase.

You can practice conjugating many English verbs to increase your awareness of verb tenses. Use this format for the basic conjugation:

You can also practice completing these five forms of English. A mixture of tenses is used to show that you can practice the different forms with any tense.

People who are new to English often experience confusion about which verb forms can serve as the verb in a sentence. An English sentence must include at least one verb or verb phrase and a tense that relays the time during which the action is taking place. Verbals (such as gerunds and infinitives) should not be confused with verbs.

Past tense correct example: Yesterday, I called you at 5:00 p.m.

Past tense incorrect example: Yesterday, I call you at 5:00 p.m.

Future tense correct example: The next time it rains, I will bring my umbrella.

Future tense incorrect example: The next time it rains, I bring my umbrella.

Present tense correct example: Come in and get warm.

Present tense incorrect example: Come in and got warm. 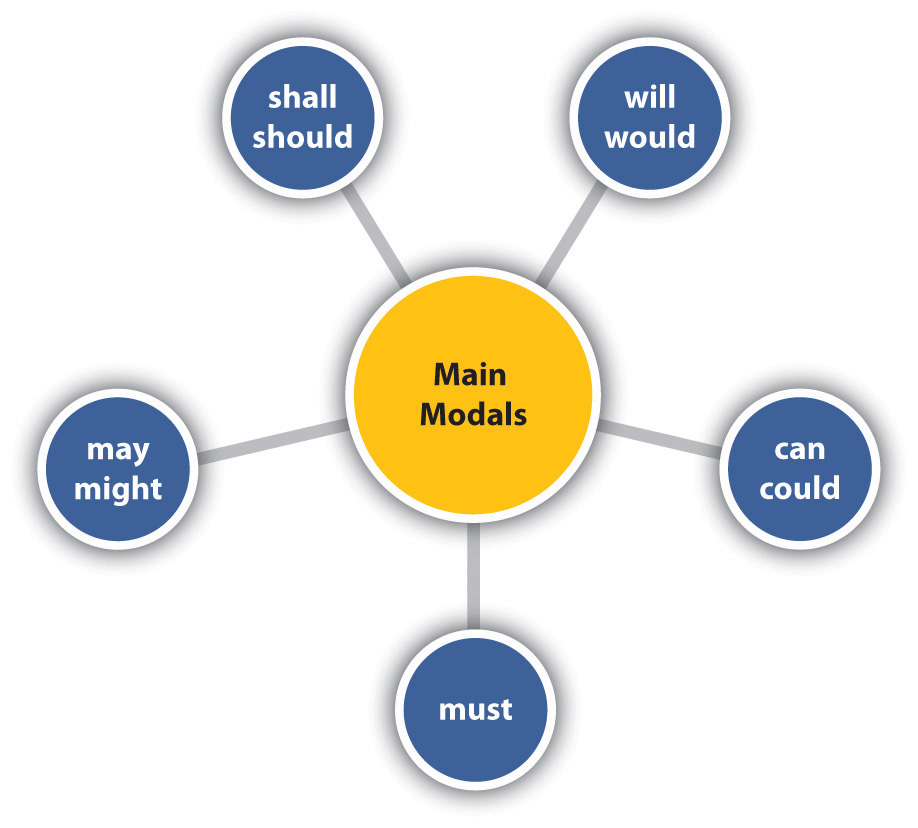 The English language includes nine main modal auxiliary verbs that are used with other verbs. These modals, shown in the wheel in four pairs and a single, can refer to past, present, or future tense based on the verbs that are used with them. The modals themselves do not change form to change tense. As shown in the following table, you can use modals to express an attitude in regard to the action or general situation of the sentence.

These Verbs Could Fill This Blank: _______ Walking

Verbs That Can Be Followed by Either Gerunds or Infinitives

Participles are verb forms that combine with auxiliary verbs to create different tenses.

Adverbs often end in –ly and modify verbs, other adverbs, and adjectives. As a rule, you should place an adverb next to or close to the word it modifies, although adverbs can be placed in different positions within a sentence without affecting its meaning.

Before the verb: “He slowly walked to the store.”

After the verb: “He walked slowly to the store.”

At the beginning of the sentence: “Slowly, he walked to the store.”

At the end of the sentence: “He walked to the store slowly.”

Between an auxiliary and main verb: “He was slowly walking to the store.”

Some adverbs, however, have a different meaning based on where they are placed. You should check to make sure that your placement carries the intended meaning.

“She only loved him.”

Translation: “The only emotion she felt toward him was love.”

“Only she loved him.”

Translation: “The only person who loved him was her.”

Translation: “The only person she loved was him.”

Some adverbs simply do not work between the verb and the direct object in a sentence.

Adjectives modify nouns and in some more heavily inflected languages, the endings of adjectives change to agree with the number and gender of the noun. In English, adjectives do not change in this way. For example, within the following sentences, note how the spelling of the adjective “eager” remains the same, regardless of the number or the gender of the noun it modifies.

The eager boys lined up.

The eager girls eyed the starter.

As in these sentences, adjectives usually are placed before a noun. The noun can be the subject, as in the preceding example, or a direct object, as in the following sentence.

Adjectives can also be placed after a linking verb. The adjective still modifies a noun but is not placed next to the noun, as in the following example.

The weather was miserable.

When two or more adjectives are used to modify a single noun, they should be used in a set order. Even though the table shows ten levels within the hierarchy, you should limit your adjectives per noun to two or three.

When using an adverb and adjective together with a noun, you should typically place the adverb first, followed by the adjective, and then the noun.

In English, adjectives have comparative and superlative forms that are used to more exactly describe nouns.

Joey is tall, Pete is taller than Joey, and Malik is the tallest of the three boys.

Lucy is eager to start, Callie is more eager, and Shannon is the most eager.

Some adjectives’ comparatives and superlatives can be formed with either –er and –est or with more and most (or less and least). In these cases, choose the version that works best within a given sentence.

Some adjectives do not have comparative and superlative forms since the simplest form expresses the only possible form.

Sample Adjectives That Do Not Have Comparative and Superlative Forms

Indefinite adjective: We are having some cake for dessert.

Indefinite pronoun: I like cake. I’ll have some, please.

Indefinite adjective: You can find a state name on each quarter.

Indefinite pronoun: I have four Illinois quarters, and each is brand new.

Since linking verbs express a state of being instead of an action, adjectives are used after them instead of adverbs. An adjective that follows a linking verb is referred to as a predicate adjective. Be careful not to use an adverb simply because of the proximity to the verb.

Linking Verbs That Can Be Followed by Adjectives

Phrases are groups of words that work together as a single unit but do not have a subject or a verb. English includes five basic kinds of phrases.

An adjective clause gives information about a preceding noun in a sentence. Look at the following examples.

The car that Richie was driving was yellow.

Des Moines, where I live, is in Iowa.

Mr. Creeter, whose brother I know, is the new math teacher.

Prepositions are words that show the relationships between two or more other words. Choosing correct prepositions can be challenging, but the following examples will help clarify how to use some of the most common prepositions.

Some languages, especially those that make greater use of inflection, do not include all the sentence parts that English includes. Take special care to include those English parts that you might not be used to including in your native language. The following table shows some of these words that are needed in English but not in other languages.

Not and Other Negative Words 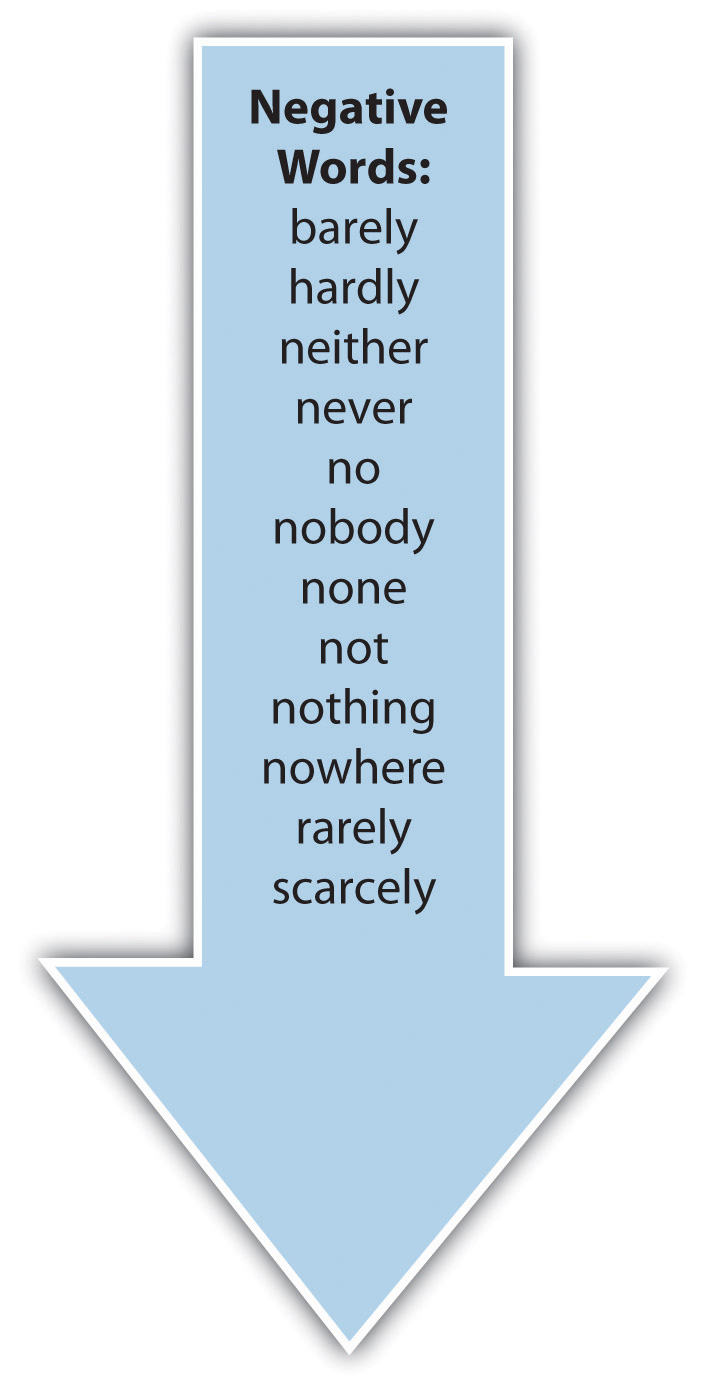 I was barely awake when I heard you come home.

Kurt is not going with us.

In casual English, it is common to form contractions, or shortened combined words, with the auxiliary or linking verb and the word not. Contractions are typically not acceptable in very formal writing but are becoming more and more common in certain academic and public contexts.

I haven’t heard that before.

Correct: I didn’t hear anything.

Incorrect: I didn’t hear nothing. (The two negatives change to a positive, so the sentence technically means “I heard something.”)

Idioms are informal, colorful language. Although their intent is to add interest to the English language, they also add a lot of confusion since their intended meanings are not aligned with their literal meanings. In time, you will learn the idioms that your acquaintances use. Until then, reading lists of idioms, such as the following, might prove helpful. Just remember that when a person says something that seems to make no sense at all, an idiom might be involved. Also, keep in mind that this list is just a very small sampling of the thousands of idiomatic expressions that occur in English, as happens with any language.

Spelling is a vital part of your written English skills. Your spelling needs to include both an understanding of general spelling rules and a mastery of common words that you will use often. The following are some of the most common words you will need to spell listed in categories.

Your original language has its own structures, formats, and cultural assumptions that are likely natural to you but perhaps different from those of English. The following broad guidelines underlie basic American English and US academic writing.