Why is Reading Important?

Here is a great short video on the importance of reading by Improvement Pill:

Critical thinkers consider multiple sides of an issue before choosing sides. They tend to ask questions instead of accepting everything they hear or read, and they know that answers often only open up more lines of inquiry. Critical thinkers read between the lines instead of reading only at face value. Critical thinkers recognize that much of the information they read and hear is a combination of fact and opinion. To be successful in college, you will have to learn to differentiate between fact and opinion through logic, questioning, and verification.

Facts are pieces of information that you can verify as true. Opinions are personal views or beliefs that may have very little grounding in fact. Since opinions are often put forth as if they were facts, they can be challenging to recognize as opinions. That’s where critical thinkers tend to keep questioning. It is not enough to question only the obviously opinionated material in a text. Critical thinkers develop a habit of subjecting all textual statements to a whole constellation of questions about the speaker (or writer), the intended audience, the statement itself, and the relevance of it.

Writers naturally write with some basic assumptions. Without a starting point, a writer would have no way to begin writing. As a reader, you have to be able to identify the assumptions a writer makes and then judge whether or not those assumptions need to be challenged or questioned. As an active reader, you must acknowledge that both writers and readers make assumptions as they negotiate the meaning of any text. A good process for uncovering assumptions is to try to think backward from the text. Get into the habit of asking yourself, “In order to make this given statement, what else must this writer also believe?”

1. Use the set of questions at the end of this section to answer questions about the speaker, audience, statement, and relevance for a text of your choice. Here are some promising avenues to pursue:

2. Use the questions for a reading from one of your other classes (even a chapter from a textbook) or a reading in your composition class assigned by your instructor.

Reading a Text Carefully and Closely

In this section, we’ll use an excerpt from one of the most famous inaugural addresses in American history, from John F. Kennedy in 1961, to demonstrate how to do a close reading by separating fact and opinion; uncovering assumptions, biases, and preconceptions; and pursuing the implications of textual statements.

You can find the transcript of JFK’s inaugural address here.

Here is a video of JFK’s inaugural address:

Twenty Questions about Self, Text, and Context

Note that most of these questions can’t be answered until you’ve made a first pass through the text, while others almost certainly require some research to be answered fully. It’s almost a given that multiple readings will be required to fully understand a text, its context, and your orientation toward it.

In the first annotation, let’s consider Roger (Student A) and Rhonda (Student B), both of whom read the speech without any advance preparation and without examining their biases and preconceptions. Take a look at the comment boxes attached to the excerpt of the first five paragraphs of Kennedy’s Inaugural Address. 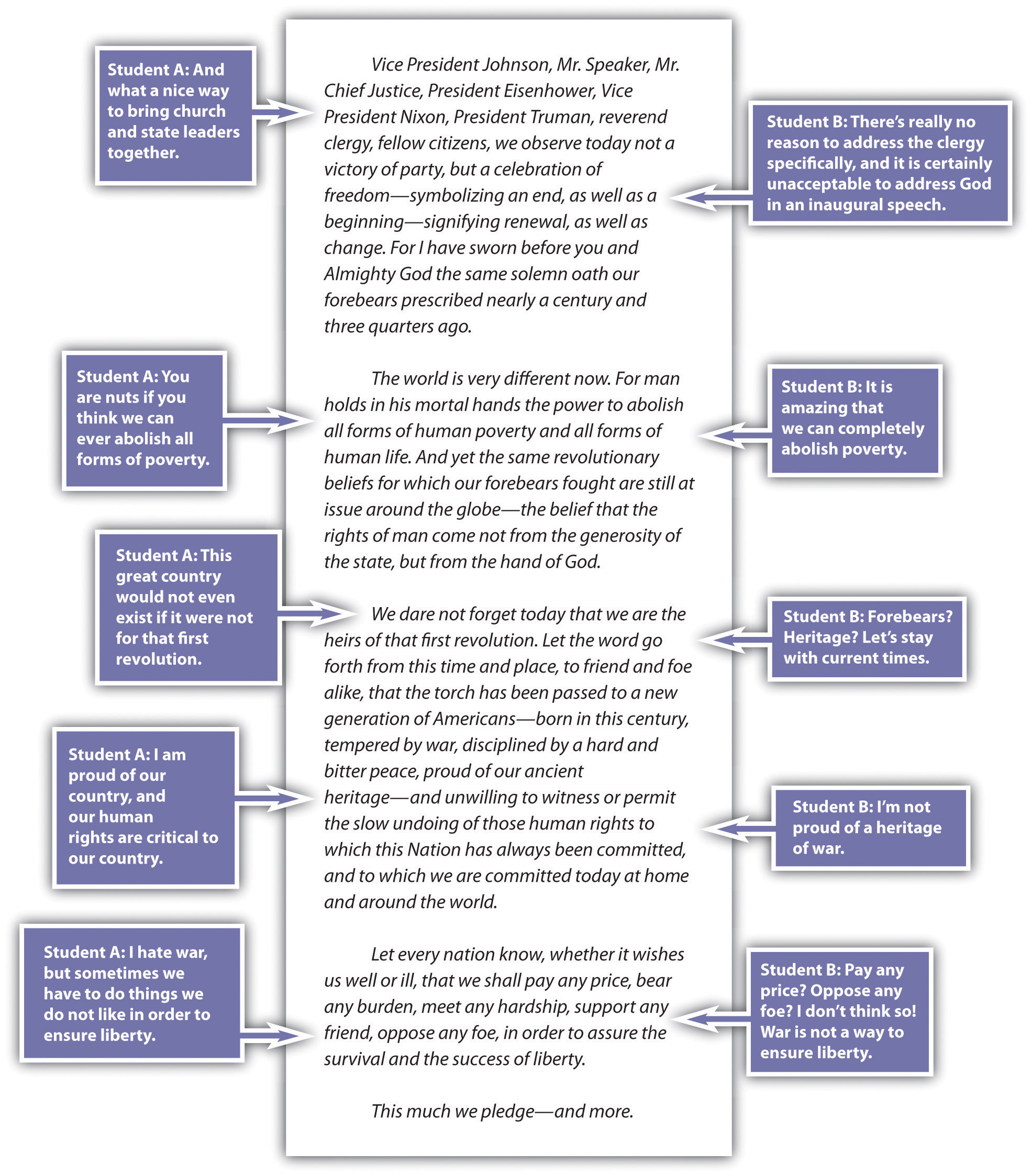 Roger does not have any problem with a lack of separation between church and state. Rhonda is unwilling to accept any reference to God in any government setting. Should Roger at least recognize the rationale for separating church and state? Should Rhonda recognize that while the founders of this country called for such a separation, they also made repeated reference to God in their writings?

Perhaps both Roger and Rhonda should consider that Kennedy’s lofty goal of eliminating poverty was perhaps an intentional rhetorical overreach, typical of inaugural addresses, meant to inspire the general process of poverty elimination and not to lay out specific policy.

Roger sees war as a necessary evil in the search for peace. Rhonda sees war as an unacceptable evil that should never be used as a means to an end. To hear what Kennedy is saying, Roger probably needs to consider options other than war and Rhonda probably needs to recognize that history has shown some positive results from “necessary” wars.

If Roger and Rhonda want to be critical thinkers or even if they want have a meaningful conversation about the text, they must think through and past their own personal biases and preconceptions. They must prepare themselves to be critical readers.

In the next set of annotations, let’s look at what you could do with the text by making several close readings of it, while also subjecting it to the preceding Twenty Questions. Perhaps your first annotation could simply be designed to separate statements of verifiable fact from those of subjective opinion. 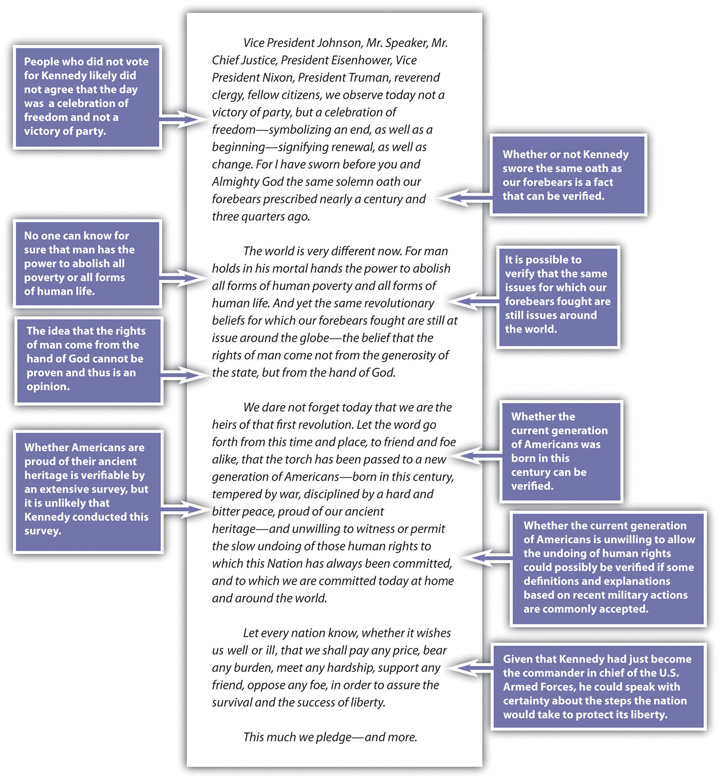 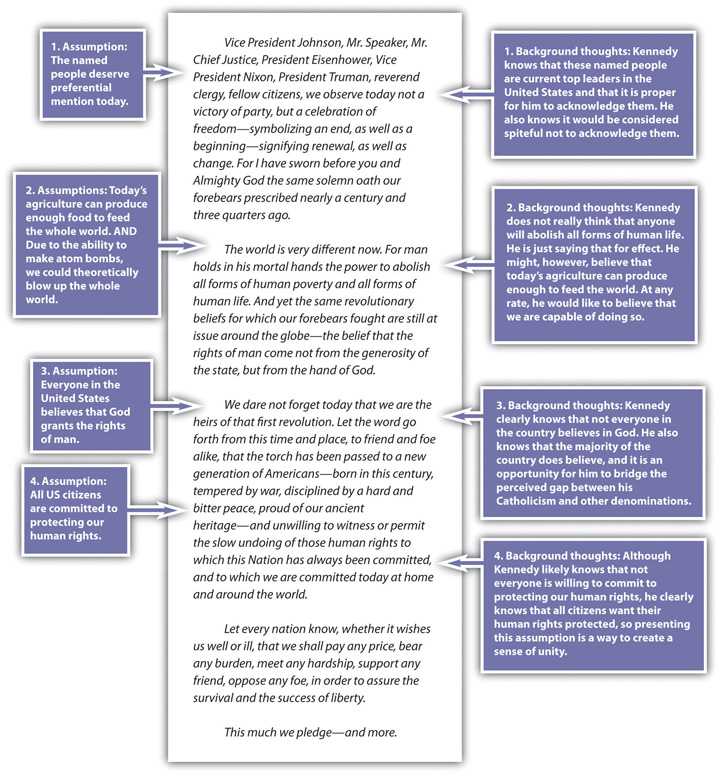 Just as you must try to trace a statement back to its underlying assumptions, you must also try to understand what a statement implies. Even when different readers are looking at the same text, they can sometimes disagree about the implications of a statement. Their disagreements often form the basis for their divergent opinions as readers.

Take Kennedy’s assumption that the named people at the beginning of his speech deserve preferential attention. Here are some possible implications of the statement you could come up with that result from that single assumption:

You could add more to this list of possible implications, but notice how much you’ve done with the first paragraph of the speech already, simply by slowing down your critical reading process.

1. Apply some of the critical thinking methods outlined in this section to another presidential inaugural address.

2. Presidential inaugural addresses, having developed over more than two centuries, follow a certain set of unspoken rules of a highly traditional genre. After looking at three to five other examples of the genre besides Kennedy’s, list at least five things most inaugural addresses are expected to accomplish. Give examples and excerpts of those generic conventions from the three to five other texts you choose. Or try this exercise with other regularly scheduled, ceremonial addresses like the State of the Union.

3. Watch at least one hour apiece of prime-time cable news on the Fox News Channel and MSNBC (preferably the same hour or at least the same night of coverage). Catalog the biases, preconceptions, assumptions, and implications of the news coverage and commentary on the same topic during those two hours. If guest “experts” are interviewed, discuss their political ideologies as well.