How old is the practice of accounting?

Luca Pacioli who lived from 1446 to 1517 is considered the father of modern accounting – that is, he devised the recording system of accounting that is still used today. However, think back – what civilisations came before the Italian renaissance? The Egyptians? Ancient China? Mesopotamia?

It has been theorised by researchers that accounting came first in terms of recording, then supplemented by writing to explain that accounting. And even that money came into existence because it was a way to represent value in a standardised manner (Ezzamel and Hoskin 2002).

No matter what ancient civilisation – China, Greece, Persia, India, Rome (to name a few) – they all had some method of accounting so that accountability could be ensured.

As a non-indigenous writer, there is no way in which I can or would ever dream of speaking for Indigenous Australians. In the following commentary I am speaking of indigenous cultures. I welcome Indigenous scholars to get in touch with me to contribute to this section of the text.

Bruce Pascoe in his book Dark Emu builds the argument that pre-colonial Indigenous Australians were more than the nomadic hunter-gatherers taught in Australian high schools. That Aboriginal Australians engaged in agriculture, farming and constructed permanent dwellings. There were regular gatherings in which tribes stockpiled food and supplies in advance. All of this implies that there was some sort of system related to counting, budgeting and planning – but was it accounting?

Greer and Patel (2000) put forward the following in their abstract:

Utilising an alternative yin/yang framework developed for accounting by Hines, we argue that the core indigenous yin values of sharing, relatedness and kinship obligations inherent in indigenous conceptions of work and land, are incompatible with the yang values of quantification, objectivity, efficiency, productivity, reason and logic imposed by accounting and accountability systems

The views of Greer and Patel are quite controversial with the idea that core values of Indigenous Australians are not compatible with accounting and accountability. However, their paper was published in 2000 – over 20 years ago. If we think back to the definition of accounting in the previous section:

Accounting is a technical, social and moral practice concerned with the sustainable utilisation of resources and proper accountability to stakeholders to enable the flourishing of organisations, people and nature. (Carnegie, Parker and Tsahuridu 2021) emphasis added

Perhaps there are ways to combine the perspectives of the traditional custodians of the lands of Australia with broader definitions of accounting to be a force for good not only for an individual business or organisation, but people and our environment.

The impact of cultural norms on accounting practices

While accounting is considered universal, how accountants implement accounting principles and practices have been shown to differ with cultural and societal norms. For example, Gao and Handley-Schachler (2003) report on how feng shui, Confucianism and Buddhism have affected the developing of accounting practices in China.

Cultural norms can be seen in the simplest of numerical traditions. Think about how we quickly tally numbers – artist Siyu Cao from Tiny Eyes Comics produced this example. 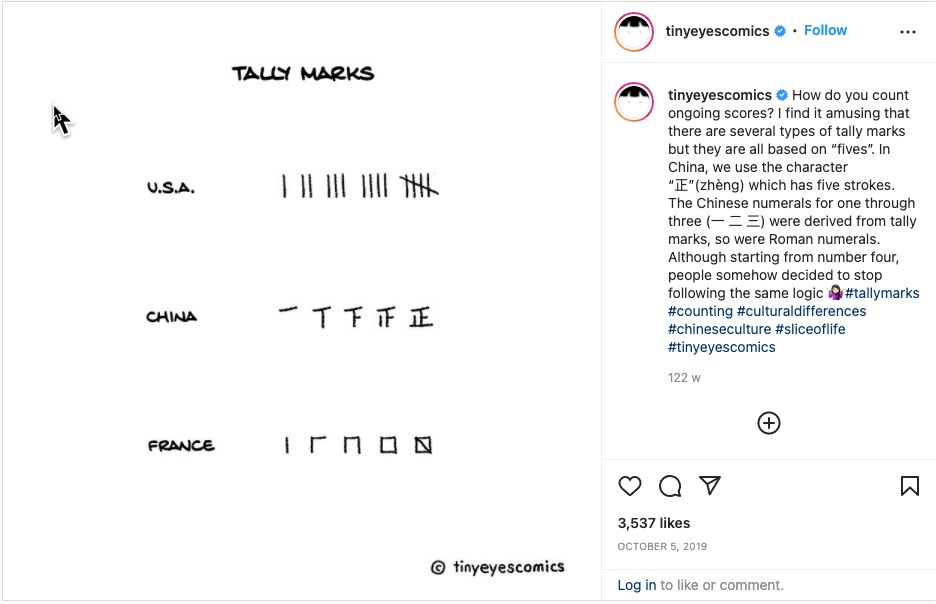 Another example is the use of payments to government or regulatory officials to speed up the processing of an approval or to increase the chance of receiving an approval. In many cultures this is clearly considered an illegal bribe. In others, it is considered simply a regular and usual cost of doing business because graft/bribes are a culturally accepted norm. The globalisation of business and the increasing power of the ordinary person, however, has resulted in this type of practice being condemned by many as inappropriate. I once was contacted by a former student who had returned to her home country and asked me for advice on how to convince the managers of a large construction company that bribes were not permitted to be recorded as a legitimate business expense!

The history of counting and accounting across the world by Amanda White is licensed under a Creative Commons Attribution-NonCommercial-ShareAlike 4.0 International License, except where otherwise noted.